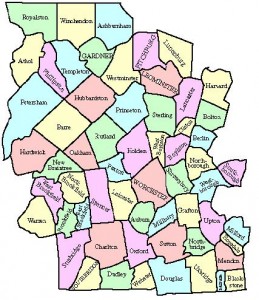 Worcester County is a non-governmental county and the largest in Massachusetts geographically. The traditional county seat is the city of Worcester.

Home to one of the major cities in Massachusetts, Worcester County has a number of things that make it significant to the state and its residents. Aside from being the largest county in Massachusetts measured by area, Worcester County has a long history in both manufacturing and socially progressive movements. The county of Worcester and the cities and towns that make it up have a lot to be proud of, as well as a great deal to look forward to as the county moves into the future.

Things to know about Worcester County

History – The creation of Worcester County involved the use of several counties in the area to construct a new government. The establishment of Worcester County in 1731 required portions of colonial Hampshire County, the furthermost western part of Suffolk County and a part of Middlesex County. The actual town of Worcester was decided to be the county seat – referred to at the time as the shire town.

The size of Worcester County made it a target for a number of political attempts to divide it up. Over the 140 year period the county had its own county government, a split of one sort or another was attempted 15 separate times. None of the attempts were successful, but not for lack of trying.

Eventually the state of Massachusetts determined that the county government of Worcester County was no longer necessary and it eliminated or absorbed the various government entities that ran the county.

Size – Worcester County is large by any standard. Covering over a million and a half square miles, the county is so large that it is bigger than Rhode Island – even when you include the water claimed by Rhode Island in the Atlantic.

Location – Worcester County is also important for its location. It makes up Central Massachusetts, separating the Eastern and Western portions of the state from one another.

Manufacturing – It was the turn of the 19th century that saw Worcester, and Worcester County, move into manufacturing with avid enthusiasm. Most anything that was made in New England at that time was produced in Worcester, to the profit of many growing companies. Textiles, shoes and clothing, then eventually power looms, machinery and wire products – all of these were produced in abundance in Worcester. A number of inventions came out of Worcester as well, including the Valentine’s Day card, Candle-pin bowling and the monkey wrench.

Of course, no American city could stay at the top of the manufacturing world forever. Work moved overseas and even the great industries present in Worcester faded. Some manufacturing still remains, but not at the levels seen in the first part of the 20th century.

Real estate – Worcester County remains a popular area to buy a home in for several reasons. It allows easy access to the city of Worcester and the industry that employs so many, and it provides real value in real estate. For those that want to purchase a home, there are a number of options to be found in Worcester County. No matter what the budget, chances are you can find what you are looking for.

Worcester County offers some fantastic real estate deals – from affordable condominiums to single family homes. There are even luxury properties available for those in the market. The key to accessing these properties is through the help of an experienced Realtor. New opportunities come up constantly, but you have to know where to look for them if you hope to be competitive as a buyer.

This area is popular with home buyers for a reason – good neighborhoods, affordable options and access to larger cities. Find a Realtor you trust and be ready to act when the right opportunity presents itself. There is no surer way to get the home you want

All towns, cities and villages in Worcester County Massachusetts include:

If you’re thinking about selling your Worcester County Massachusetts home, cond0, investment property or other real estate, allow me to help make the transaction a smooth and pleasant experience. If you’re in the market to buy real estate in Worcester County Massachusetts, you will find a variety of residential options to choose from to fit your lifestyle budget and needs.

A few of my accomplishments that I am proud of include:

I have been listing and selling homes in and around Metrowest Massachusetts for the last 27+ years.   Call or send me an email so we can discuss how I can best serve your Worcester County Massachusetts real estate needs!