Do you want to see what has happened in the Hopkinton Real Estate market for the month of October along with year over year comparisons? Below you will see a comprehensive overview of the market in town for the past month, as well as year over year results. While you are checking out the Hopkinton Real Estate report have a look at my real estate agents guide to Hopkinton MA, where you will see why the town is a popular choice of many home buyers relocating into the Metrowest area! 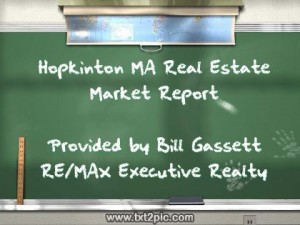 The average market time for the homes that closed for October of 2014 was 28 days.

The average market time for the homes that closed for October of 2015 was 62 days.

Homes Under Contract For October 2015

For the period of January to December 2014 there were 207 properties sold.

For the period of January to December of 2013 there were 185 properties sold.

For the period of January to December of 2012 there were 203 properties sold.

The are currently 67 homes on the market which is 14 less homes available for purchase from last month when there were 81 homes for sale. The average list price of these homes is $804,205. The average days on the market is 171. Inventory has been bouncing around for the last few months between the low 70’s and low 80’s. This month however inventory dropped by quite a bit!

Real Estate analysis so far in 2015


The real estate market in Hopkinton has been remarkably consistent. Sales throughout the year have been strong other than the first quarter of the year which got off to a slow start due to the horrendous winter we had. Appreciation has not been dramatic – market values are up marginally from last year.

We have now entered a period of time where sales will generally follow a slower pace that the Spring and early summer markets. The amount of transactions so far this year is just about the same as last. As of October there have been three less sales this year.

October was an average month with 14 sales. It was down  from last October when there were nineteen sales. Pending sales however were excellent with 15 homes going under contract.


So far in 2015 through October there have been 177 sales. At this same point in time last year there were 180 sales. Sales have been remarkably similar to last year so far.

Hopkinton ended 2014 with 207 single family homes being sold. In 2013 there were 185 so Hopkinton had an exceptional year for real estate sales.

The above statistics are for single family homes only and do not include condominiums and multi family properties.

See what took place in the Hopkinton real estate market for September 2015.

Have a look at Real Estate transactions in Hopkinton for the previous month.

Bill Gassett is a nationally recognized Real Estate leader who has been helping people move in and out of the Metrowest Massachusetts area for the past thirty-three plus years. He has been one of the top RE/MAX Realtors in New England for the past decade. In 2018 he was the #1 RE/MAX real estate agent in Massachusetts.