Google Plus For Real Estate 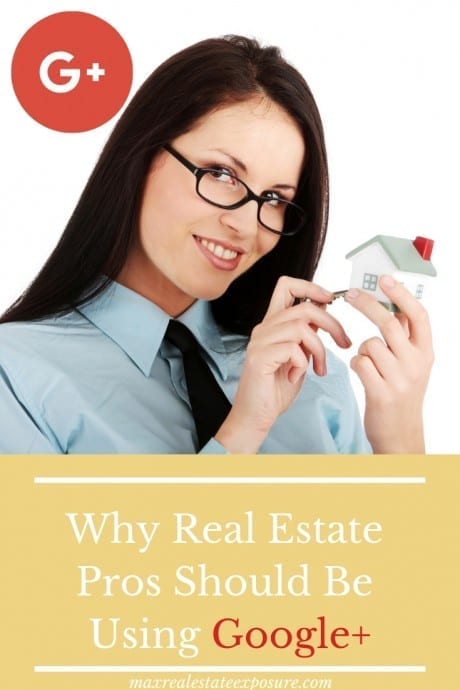 Not long ago I was talking to a local real estate professional about her social media presence. Of course, she was active on Facebook, and had even made a reasonable stab at Twitter.

Then I asked her about Google+. She looked at me like I had just hatched a Twitter bird out of my forehead.

“Why would I bother with Google Plus? I need to be where potential customers can see me.”

I couldn’t agree with her more. That’s exactly why she needs to be on Google Plus for her real estate business! Realtors should be using Google Plus to enhance their online visibility.


Google Plus is without a doubt the most misunderstood social network ever introduced. And in a strange twist, that gives you, the lucky readers of Bill Gassett’s blog, the opportunity to break ahead of your competition and get in front of more prospects they’ll never see.

But how can that happen with a network that so-called social media gurus have written off as a “ghost town”? Keep reading and you’ll discover why real estate agents should be using Google Plus!

The Hidden Power of a Google Plus Network

Most of you reading this blog are real estate professionals. Your lifeblood is in finding prospects and communicating to them, before any of your competitors can, just how awesome you are and why they need to engage you to buy or sell their next house.

Let me ask you a question. If I gave you a choice between having a tiny booth in a huge exhibition hall full of other Realtors all after the same prospects wandering around, or the ability to go right into the homes of every one of those prospects, which would you choose?

You’d be crazy to not choose the latter. And I’m going to show you how to do just that.

The reason most business people and even social media consultants write off Google+ is that they don’t really understand how different what Google has created is from every other social network in existence.

They assume that Google Plus is just a too-late-to-the-game Facebook wannabe. They couldn’t be more wrong. Using Google Plus for real estate should be an important part of any Realtors social media game plan.

First of all, the ghost town rumors couldn’t be more untrue. The last numbers Google released (in December 2012) claimed 135 million active users (users actually doing something on the Google+ interface). An independent global survey in January 2013 by Global Web Index claims over 300 million active users. Whatever number you believe, that’s a very impressive showing for a social network only 1-1/2 years old.

Those of us active on GooglePlus have always scratched our heads at the ghost town perception. In just 18 months I have over 30,000 followers on Google plus and more engagement than I can keep track of. I’ve been on Twitter (and worked it hard) for over 2 years, and have just under 2000 followers there.

I think much of the ghost town perception came from users who never quite got how to work Google+. Facebook made it easy to find and connect with your family and old friends. But people came to Google+, set up profiles, posted a few things, and then got discouraged when nobody followed them.

Twitter had a similar problem in the beginning because it has a similar follower-following model. On both networks, you won’t see anyone until you follow them (“circle” them in G+-speak), and even if you do, they won’t see your stuff unless they follow/circle you. So on Google+ you can’t just put your shingle out and expect people to show up. You’ve got to go out and find them. More on why that’s an advantage later.

If people have heard anything positive at all about Google Plus, it’s usually the “SEO (Search Engine Optimization) benefits” that are being touted. Very early on people noticed that public Google+ posts were indexed for Google search. Then webmasters found that if they created a new site and submitted posts to Google+, their site could be indexed almost instantly (compared to the weeks to months it usually took).

Being a social media consultant in an SEO agency, I was intrigued. I began carrying out experiments of my own, seeing how far I could push this intriguing power to directly inject things into Google’s search results. Unlike other social media posts like tweets, I found that some of my Google+ posts could rank at the top of search results and stay there for months and months. For example. a G+ post I did about “Google+ Page Analytics” has been at #1 for that keyword in logged-out Google search for over a year now.

Google Plus even helped my agency claim 8 of the 10 first page results for a few days for a new product we introduced!

But as impressive as those SEO tricks were, we hadn’t yet seen the real power of Google+ in Google search. Not until January of 2012.

Introducing Search Plus Your World

In January of 2012 Google introduced a new version of Google Search: Search Plus Your World (S+YW). This was Google’s personalization of search taken to the next level. Now if you are searching on Google while logged in to Google (say, for using Gmail), your results by default are strongly affected by your Google network. Your Google network is all your Google contacts plus anyone you’ve circled on Google+. And there is almost certainly some influence from your “extended network” (people who have circled you and people in circles of people you’ve circled).

What does this look like in the search results?

Let’s say I’m searching for “top real estate agents on twitter.” Here’s what I see if I search logged-out of Google:

Fine, but not exactly what I was hoping to find. Now let me do the same search logged in to my Google account: 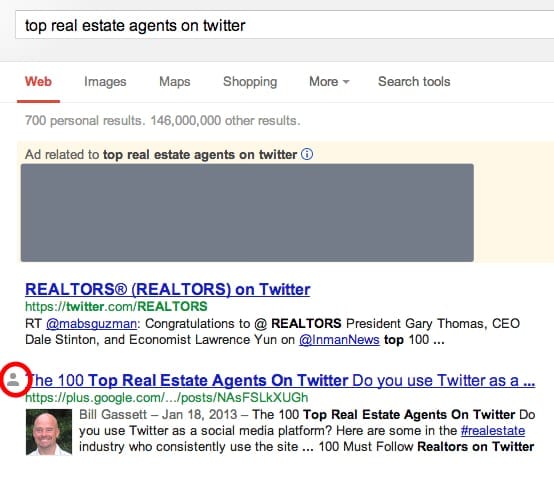 Hey look! It’s Bill Gassett, owner of this blog! Bill and I are friends on Google+. I’ve come to know and trust him, so his recommendations will be far more meaningful to me than those of some strange web site. Without S+YW, I might not have ever known that my trusted friend Bill had made a post relevant to my query, for it would have been much further down in the search results.

So here’s what really excites me: the larger your Google/Google+ network is, the more people whose search results your are influencing. And that’s how Google+ can help get you in front of more people who never would have found you otherwise.

This alone should be a significant enough reason why Realtors should be using Google+!

Now most real estate agents work in a local market. Combined with localization, the S+YW effect becomes even more powerful. That’s because in most cases Google can see the general location of a searcher, or the location she is searching for. When localization is in play for your area, Google will boost your search result even more for in-network users. Are you starting to see the power of Google Plus for Realtors yet?

Did you notice in the screen captures above that both Bill and I have our handsome faces next to the search results? That didn’t happen just because Google likes showing off handsome men. (OK, that’s not even in play). It’s because both of us have hooked into something called Google Authorship.

Google Authorship allows content producers to connect all their content on the web with their Google+ profiles. This qualifies us to get the “author rich snippet” on our search results. Not only does this rich snippet show the author’s profile photo, but a series of important links are added as well.

Notice the line in the red box above. From left to right, the Authorship rich snippet result adds:

There’s more! If someone clicks through an Authorship result and stays on the content for at least two minutes, Google takes that as a sign that the searcher liked what she found. If the searcher hits the back button to return to the search results page, the original result has now expanded to show three more links to that author’s content:

Why would anyone turn down getting that much extra real estate in Google search? That’s something people pay SEO agencies like mine thousands of dollars to get, and Google is giving it out for free!

But as they say on late night TV, wait, there”s even more!

**Update: Unfortunately Google Plus got rid of the feature of showing an authors photo in search.**

Shortly after Google introduced Authorship, they released a YouTube video about it featuring Google “spam czar” Matt Cutts interviewing Authorship project head Othar Hansson. Hansson indicated that one of the things Google might do with Authorship is eventually use it as a ranking signal. Savvy Google followers immediately made the association of this idea back to a series of patents owned by Google going back to 2005 for something called “Agent Rank.”

Agent Rank would be the ability of a search engine to track the social signals around a particular “entity” and score it by its authority in various topics. That score would be used to influence search results associated with the entity. Among the entities named were authors (individual online content producers). Google+ profiles and Google Authorship put in place what Google needed to move toward Author Rank.

While there is no indication that Author Rank is yet in play in any strong manner in search results, Hansson made clear in the 2011 video that Google would begin collecting data to be used toward Author rankings. So anyone who has their content hooked up to Authorship now is accumulating authority that will put them way ahead of their competition once Author Rank kicks in.

But there are benefits right now. Studies have shown that having an author photo next to a search result can increase click-through rate (CTR) on that result by up to 30%. That’s because the human eye is drawn to human faces. In addition, a face next to a search result probably triggers a subconscious trust in the result. We like things that we think come from real people. Those factors can significantly boost the CTR of a result down the page from the coveted #1 spot.

How do you get qualified for Google Authorship? Here’s Google’s basic instructions. If you need more help, I recommend joining the Google Authorship and Author Rank Community I started on Google+. There are lots of helpful people there who can answer your questions. 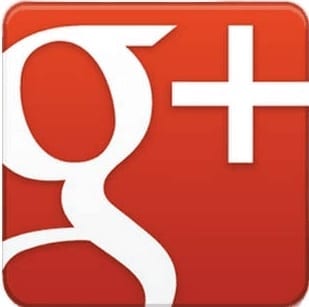 By now I hope I’ve convinced you that there is much more to Google+ and its effects on Google than most people know. But what can you do to put that to work for you and your real estate business?

Here’s a brief action plan to get you started:

There is so much more to do than those steps, but those should get you started toward establishing a valuable Google Plus network. And feel free to follow me on Google+ for lots more tips and info on using G+ for business. Google Plus for Real Estate is here!

Mark Traphagen is Senior Director of Online Marketing for Stone Temple Consulting, a digital marketing agency located in the Boston area. Mark is responsible for building the brand and reputation of Stone Temple, as well as consulting with STC clients as needed. He writes for several major marketing sites and speaks regularly at major national conferences. Mark, with over 75,000 followers on Google+, is a recognized expert on Google+ and Google Authorship.